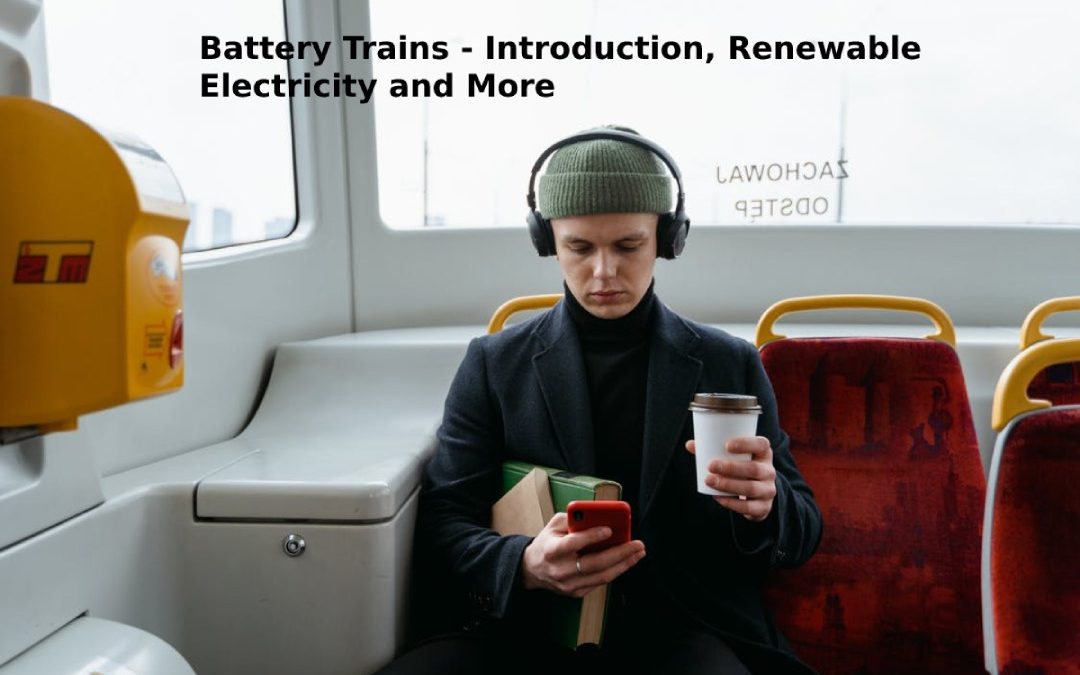 Battery Trains: With the rapid development of electric cars, eliminating carbon emissions in transport may have been possible. Still, other means such as trains and ships remain a difficult challenge. A new analysis suggests an idea to improve one of these methods.

Researchers in California conducted a study examining the possibility of electrical freight for the railway and found that the required technology already exists and can be applied under the right conditions. putting huge batteries on cargo cars has exciting benefits.

Currently, most goods in the united states are transported by diesel-powered cargo locomotives, which produce about 35 million tons of carbon dioxide annually, contributing to 1,000 premature deaths and costing $6.5 billion in health damage.

The researchers studied several options to reduce train emissions, including electrifying the entire system by placing wires over tracks, but this would result in high initial costs and ongoing maintenance costs.

The most appropriate alternative is to power cells using hydrogen, a relatively cheaper solution. Still, it requires the development of a large hydrogen production capacity by analyzing water – separated into oxygen and hydrogen – using renewable electricity. It is a technique that has been several years away from practicality.

The best option is to use batteries that can be integrated with the current system. Most locomotives use diesel fuel to power engines. Modifying the wiring system may allow locomotives to supply from an external power source, such as a battery.

Scientists studied this option years ago, but it was rejected for technical and economic reasons. Since then, however, batteries have become more extensive, and their price has fallen by 87%. The researchers in the study felt that it was worth a new look.

The typical cargo car in the united states runs at 241 kilometres per day when operational. The researchers created a battery large enough to travel that distance as part of a large freight train (four locomotives, 100 cargo vehicles, and about 7,000 tons of cargo).

They found that lithium iron phosphate would allow each of the four locomotives to exist supplied by a single car operating as a large battery. The battery would occupy only 40% of the size of a typical transport vehicle. And would stand seven tons below the weight limit imposed by the current bridges.

Due to the efficiency of direct electricity, the train will consume only about half of the energy consumed by an internal combustion engine driving a generator on board. While the above-average flight will not operate on a single charge, freight trains usually stop several times to change crew and refuel, allowing the system to stand reinforced by some rapid charging. If longer stops can exist obtained, vehicles powered by the same batteries can exist replaced.

Although the system will not require new locomotives, the necessary batteries and infrastructure will require high initial costs. The researchers collected these costs and calculated the cost of electricity needed to reach a competitive price with diesel.

Such a system does not yet exist, as the economy is susceptible to many factors. Including the current low price of diesel compared to the past. If it rises, it will lead to many changes.
Another more complex factor exists the general cost of transport infrastructure based on its widespread use.

The overall electricity economy will improve if carriers adjust their schedules to use chargers about half the time. Restricting the imposition of duties on renewable energy sources will also increase the supply of energy, thereby significantly reducing the cost of shipping. Another factor in calculating the cost of health problems caused by diesel exhaust.

Using an economic measure called “net present value,” researchers found that switching to batteries would cost $15 billion. But taking into account pollution damage, it would save $44 billion. Considering climate damage, the savings amount rises to $94 billion. Even if these damages exist not considered, the high price of diesel and allowing transport companies to buy energy at wholesale prices make the cost even.

Away from using batteries for transport. It’s interesting to think about the potential uses of giant batteries, even without moving them. Carriers can use their ability to provide network installation or resale services when the price rises. In extreme cases, this system can afford the entire infrastructure.

“Preliminary estimates of the most expensive 90 hours per year appear in the texas escort market. For example, that batteries can exist unloaded at $200/kwh, potentially generating enough revenue to pay for the battery in advance for one year,” the study said.

Batteries can also stand transported to sites damaged by power outages or natural disasters. As diesel locomotives pull them out instead of draining batteries.

All this would add significant levels of complexity to the task of providing carriers with the energy to perform their primary function of transporting materials.

Making the most of Battery Trains may involve constantly monitoring electricity. And diesel prices, comparing the result with charging capacity and shipping deadlines. Still, if the idea exists implemented correctly, emissions can exist eliminated in the form of transport where carbon is complex to get rid of.

Laptop - Should the Laptop Always Connected to Electricity?